Wifi at Gigabit Speeds, What you need to know about 802.11ac 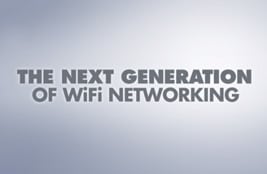 Wireless networks are set to make another leap forward in speed with the latest standard, nicknamed GigaWifi or the proper name 802.11ac. This new standard should at minimum triple the speed of current Wifi networks. See Netgears video below for an explanation of how it works.

This level of bandwidth completely eliminates the need for cabled connections for reliable HD & 4K HD video streaming, giving unprecedented network speeds over the air.
The new standard will be backward compatibly with existing systems although will require either of the connecting devices to operate on a compatible frequency (2.4 or 5Ghz)

By 2015 802.11ac will become the common place on all new equipment, although 11n is likely to remain with us for at least another 5 years. At the time of writing May 2012, compatible routers and wireless access points are scheduled for release in the next few months.

The new standard achieves this phenomenal level of performance by the following changes over the 802.11n standard.

New Wireless Network for Newport’s Hotel 55 Congratulations to our Technical Engineer Adam Smith on receiving the outstanding achievement award from Jobs Growth Wales! Cat5e, 6, 6a, 7, 7a or 8! What network do I choose right now? More Than Motorways: The Many Uses of ANPR Technology